My dear Dressage fans, today I have a treat for you!

Trudi Dempsey of Creative Equine Training has created this guest blog specially for The Crystal System.  It’s a topic that quite simply I have not considered before …. read on

When Patricia kindly invited me to guest blog she mentioned that it would be good to pick a subject that engendered lively debate! To be honest I’m not really someone who goes out of their way to stir things. I’ve signed petitions protesting about rollkur, against the appalling conditions that horses endure when travelling to slaughter across Europe, the right to compete in bitless bridles etc and I’ve written of the sadness I feel when seeing lost souls hauling the front end in with draw reins and other dreadful devices but these topics are hardly likely to engender any form of debate at The Crystal System let alone lively debate! They are a done deal, we all agree, yay! So what to spout about, what can I whip up any kind of frenzy about? As always when blogging the subject has been knocking about in the depths of my consciousness for some time but I’ve been pushing it deeper to avoid jumping off my comfy fence!

For me it’s not a topic that has to be agreed upon but debate will probably bring both agreement and disagreement, ergo debate. Rest assured I’m not sitting in judgement; I have no perfect answer because as always it really will be the horse that stands as judge and jury.

It’s many years since I’ve competed, in fact I’ve had a whole ‘other’ life in France and come back again since I last entered the competitive dressage arena. My two current P.R.E. horses have been spared the terrifying judges box/car, they have never known the horse eating flower monsters nor the horn of doom. Call yourself a dressage trainer but you don’t compete I hear the cry! It isn’t that easy though, at least not for me and the thing is that I’m not really sure when this all happened. I’m pretty sure it’s a number of, perhaps, random things that have conspired against my competitive spirit, battled with it and beaten it good and proper to the ground but maybe it’s actually a path I was destined to take all along.

I really should come clean at the start and mention that I am an Interdressage judge. The Interdressage system allows competitors to film their dressage test at home and submit their entries for judging online. There are a number of online dressage test sites all offering the chance to compete without the stress of leaving home or indeed the expense. I also undertook training as a British Dressage judge before departing to live in France. So you can already see how tricky it is for me to launch my derrière from this rather wide fence I’m perched on. 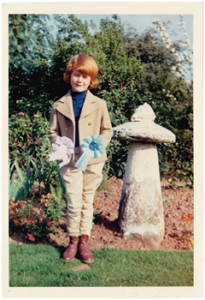 If I go back to my childhood with ponies it was probably quite a typical horsey upbringing; I hunted, jumped (show jumping and cross country, and entered gymkhana events plus the occasional showing class. I would hack for hours to a meet, pony club rally or riding club show and make the return journey after competing. I coveted the big red (or sometimes blue) rosette of first place and would almost burst with happiness when, on the rare occasion, I was awarded one. I sulked when my pony refused the first fence three times and red faced I left the arena, my Dad’s encouraging (oh yeah!) cries ringing in my ears.

I was very small when I attended my first horse race with my Dad and not much bigger when I picked my first winner at a point to point. I lived for some years in a racecourse heavy area of Surrey where (with my husband) we indulged our passion for picking a winner, or at least trying to. The Epsom gallops passed our garden and Derby day was a major celebration. I still recall in 1991 Generous winning the Derby and the fabulous meal we ate at Tattenham Corner to celebrate. This fence is becoming more armchair like as I type!

I have spent countless hours sat in horseboxes waiting, stood in collecting rings putting up practice fences for my husband. I have plaited manes, committed tests to memory and driven myself to equestrian centres- that is until one little mare made me sit up and smell the coffee in the canteen!

The mare in question was on livery with me and had competed at novice level with varying degrees of success. The first time I took her out to compete was at Addington Manor, a large venue with indoor and outdoor arenas with all the madness of horses moving between the two. Warm up was indoors and entering the arena she just exploded into piaffe (something I may have been delighted with at home) and instantly dripped with sweat. I hastily left the warm up area amid tuts and head shakes from beautifully made up ladies on big bay warmbloods! Plan B was a warm up hack which went pretty well…until we returned a minute or so before our ‘enter at A’. On riding up the centre line the tension returned and she ignored every pleading aid I could offer. After a 20m circle in a wall of death canter I finally admitted defeat, took polite leave of the judge and returned to the lorry deep in contemplation. The first hand proffered from beyond the comfort of the fence!

Living in dressage droughtville in France (the Limousin prizes its cows rather than its horses) took me away from the competitive world and into a burgeoning world of forums, blogs and online information. The internet saved my horsey sanity at the start of the noughties exiled in France and the free exchange of views brought me into contact with some rather diverse opinions such as those polarized views of Alexandеr Nevzorov, the anti-equestrian sport guru who is definitely not perched on any fence in these matters.

My own choice of equine partner may ultimately have tempted me to leave that fence or, if not, at least made me question some of my long held beliefs about competing with horses. The P.R.E has energy and character in abundance and they are truly a joy to train but the energy is too easy to misdirect and tension results. I was told many times when competing warmbloods that you should train them deep so that the tension at a competition would bring them up into an ‘acceptable’ self -carriage.  Training deep is not and never has been my thing but training my sensitive boys has made me even more aware of how tension can manifest itself and how unhappy it seems to make them. 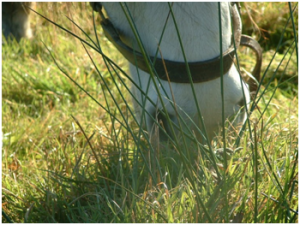 I think the answer, as in so many things, is probably to find a balance. I have had many, seemingly small, invitations to step down from the fence but I have resisted taking the huge leap to being absolutely against all equine competition. If we are able to curb our ego and consider the welfare of the horse above ALL else perhaps there is a way forwards. Or is there? Can we really justify our human need to win when it relies on the horse doing most of the work?

Did I mention my comfy fence?

Thank you to Trudie for giving me the opportunity to consider this subject.  I googled Alexandеr Nevzorov as he is not a ‘guru’ that I have come across before.  Now there’s an interesting site!

So, to compete or not to compete? That is the question.  I’m a Dressage Honey … No fences for me!  My view … competition is a good thing. It’s about finding out how well you can do something. It’s about challenging yourself to get better. It’s about working together with others to accomplish a goal. You compete to succeed; to be the best you can be. Is it about winning? no, for me it’s about ‘wanting to win’ – working to win and preparing to win.

My toughest opponent is myself.  To have a good outcome, a person has to focus on and commit to doing the work needed to improve.  But, Trudie is right, the most important thing is balance.  Whether you think Dressage Competitions are a good or bad thing, for me the bottom line is this – whatever I do in life I try to do it well. Whether you recognise it or not, this is the creation of a competitive situation and doing one’s best when something is really important to you is a challenge everyone should attempt.

Oh, and something else just occurred to me … does the horse know that it’s competing?  If you pressurise your horse, if you put him in situations that he is not comfortable with, if you have no relationship of trust with your horse, then you have that sad fact whether you compete or not.

If you do not compete, select Horse/Rider Relationship from the category on the sidebar, there’s some great stuff in there for you.

Dress it for the Vertical by Aspire Equestrian
Retraining Of Racehorses - Dressage
Meet A Finalist: The Dressage Tipster by Haynet