Well folks, The Crystal System Book is complete (well almost), it’s with the editor and we are in the process of designing the cover.  I have lots of people to thank for getting this far, not least my 3 Test Pilots, Amanda Cowley, Sue Clark and Helen Mathie.

Having already introduced Amanda and Sue to you now it’s time to introduce you to the remarkable Helen.

Helen Mathie MSc BSc (Hons) MCSP HPC ACPAT is the Performance and Development Para-Equestrian Dressage Physiotherapist and currently works as physiotherapist for both riders and horses on the para-equestrian dressage World Class Development Squad.  She also works with the Performance squad riders and has accompanied them to the Beijing 2008, WEG 2010 and the London Paralympics 2012.  Helen is dually qualified to treat both humans and animals having completed a MSc Veterinary Physiotherapy at the Royal Veterinary College, London in 2007. 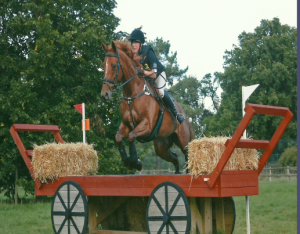 Helen was introduced to The Dressage Tipster on facebook by Sophie Wells, Paralympic, World and European Gold Medalist in June 2013.  An eventer by trade Helen wrote to me advising that she wanted to cross to the other side!

She has been lucky enough to be ringside when some of the worlds best dressage riders have been warming up at WEG, Europeans and the Olympics and she too wanted to ride properly.

“I now understand and want to start afresh. I have the anatomy and biomechanics knowledge and now feel I am a in better place to learn but desperately lack a system.” Helen Mathie

So, with 2 children under 3 years old, several young horses, a busy Physiotherapy practice, commitments to Team GB, a husband and a home to look after she embarked upon the Test Pilot program for The Crystal System Book. 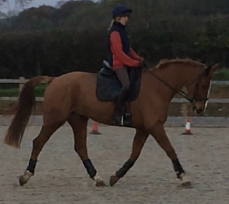 I have to say I had reservations about the time Helen would be able to commit but I should have known better, she clearly is the epitome of superwoman!  Her feedback was comprehensive and, given her background, extremely useful.  I needed to clarify a few points which made me look at some points a little differently.  Helen is delighted with her progress having taken one of her ‘hot young event horses’ to their first Dressage Test recently and scoring a very credible 67%.  Yes, if we were being hyper-critical we would say that the young horse in the picture is a little on the forehand (it’s a work in progress), but just look at Helen’s position.  Can’t fault that!!!

“So the Crystal system has really given me clarity in my approach to my schooling and has helped me enormously on a personal level with my thoughts and aspirations for the horses. I have become a lot more focused, less stressed and more accepting of when things don’t quite go to plan and I have changed my approach. I now have a system.”  Helen Mathie

I will continue to work with Helen, Amanda and Sue right up to the launch of The Crystal System Book in the Spring and will keep you posted of their progress.

By the way, Sue Clark – Test Pilot #2, has also ridden her first test since a very bad accident over a year ago and won two classes, messaging me to say “this one’s for you!”  She went on to say – I re-read your book in bed at night and I have a lot to thank you for! We had a great outing yesterday. Ollie won both his tests and received the highest percentage of the day award with 73.4%. I was thrilled with him and I think we are jelling now that I am so much more relaxed when we compete. He was willing, forward, obedient and a delight – so thanks my girl, you have helped me so much.

I have to tell you, I was very touched indeed by this tribute.

Amanda Crowley – Test Pilot #1, has transformed her rescued ex-racing thoroughbred into a willing partner and making immense progress.  She too is hoping to get to her first outing in the next few months.

I am very proud to support and be part of these plucky ladies’ dressage journey.

Take a look at Helen Mathie’s website – Aegrus Equestrian she has a small, handpicked selection of youngsters for sale. The bloodlines selected are from proven stallions that have produced many Olympic eventers and showjumpers to date includng Master Imp, Cruising, Ghareeb and Ricardo Z.

Check out the new email and print buttons below.

Now you can email these posts to your fellow dressage enthusiasts, or print them to take to the stables!  Pretty cool eh?